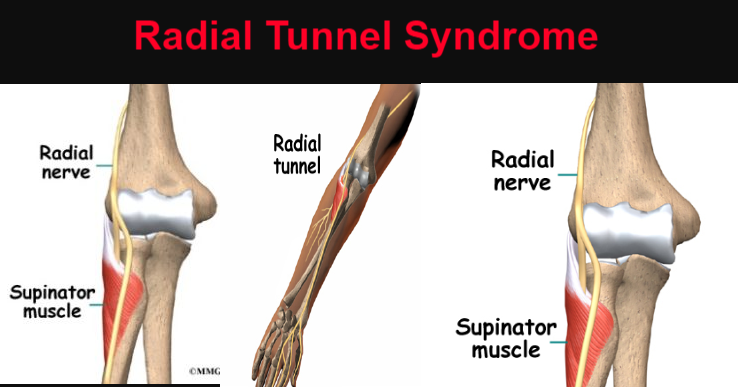 Resistant tennis elbow is also use as a name in the place of Radial Tunnel Syndrome. This is cause by the compression of the nerve in the forearm. The nerve becomes weak to cause pain due to the compression of the nerve. The radial nerve becomes swell due to the continuous movement. The movement of muscles and bones cause friction this friction plays an important role to make swell the radial nerve.

To better understand just what is involved with this disorder, a basic understanding of the anatomy of the arm can be helpful, particularly of the forearm and the hand.

In most discussions concerning the anatomy of the arm or the forearm, the attention tends to be directed towards the three primary bones,   the muscles, and to some extent the tendons of the elbow and wrist joints, with the elbow joint usually receiving the most attention.

The path taken by the three primary nerves in the arm is often neglected. However, if one of these nerves should happen to be damaged, or even if one should become irritated, the symptoms can sometimes be profound.

Upon exiting from the spinal column in the vicinity of the neck, it enters the upper arm, under the shoulder, and then follows a path near the triceps muscles where it crosses over the humerus, or upper arm bone, just above the elbow joint. It then follows one of the two lower arm bones, the radius, down to the wrist and the hand.

The radial nerve does not provide sensation at the fingertips. Another nerve, the ulnar nerve, gives sensation to part of the ring finger and the middle finger, while it is the median nerve that provides sensation to the palm of the hand and the bottoms of the fingers.

Well, if we talk about the radial tunnel then the tunnel formed by the bone and muscles is called the radial tunnel. The nerve passed down the arm when squeezes, it produces pain. There is another case when one gets pain. When the tunnel is very small and narrow, the nerve gets squeezed which leads to the pain.

You will also get pain when you will move your elbow, bend it or try to grip anything with your hand. It is very necessary to diagnose this problem because it can be increased as time will pass.

Well, if we talk about the symptoms of Radial Tunnel Syndrome then there are many symptoms from which you can diagnose this problem. One of the main symptoms is pain. You will feel pain near your elbow. The muscles of your forearm will become weak.

You will feel very weak in your hand. The pain will increase as you move or bend your elbow. These symptoms point to the problem of Radial Tunnel Syndrome. So you should go for the treatment of the problem because it can cause many other problems.

Symptoms of the Disorder

When pain is experienced, it is usually felt along the outer forearm, and it may also be felt from the wrist down into the upper part of the hand. The pain may be accompanied by weakness in the wrist or the fingers. Weakness, if present, is usually dependent upon just where compression or entrapment of the radial nerve is happening.

Pain caused by radial tunnel syndrome tends to become worse as the activity causing it continues and will become less, or go away, once the activity ceases or the arm is allowed to rest. There are instances though when the pain returns even when the arm is at rest. This happens quite often at night, with the forearm becoming painful for seemingly no good reason.

If the activity has been overly strenuous, the pain may linger on for quite some time and will be felt as a deep aching pain rather than a surface pain.  An irritated radial nerve can also cause stiffness in the muscles of the forearm, which can, at times, lead to a cramping sensation.

The human body is very sensitive and one can feel pain in any part of the body due to several reasons. There are many specific symptoms for all the pains and they are diagnosed in different methods as well. Radial tunnel syndrome is a type of problem in the human body which is related to the pains present in the elbow joints.

These joints are very sensitive and pain in these joints can be very harmful. There would be regular pain and the ability to live something with your arm can drastically decrease. You will find it very difficult to handle and you have to consult a medical specialist so that better results can be obtained. You may have to go through some proper tests and medical treatments for all these types of pains.

This is the forearm section of the human body and it can damage due to several reasons. If the radial term is not working according to the requirements then you may feel the same pain and it would be very tough for you to work properly with your forearm. Any type of load or stress on the forearm can cause some problems for the radial nerve and that particular stress will remain constant.

Consistent form of stress can cause pain and if proper treatment is not provided to the patient then it can cause more problems for the patient. Radial tunnel syndrome explains the theory which is related to the muscular compression of the forearm and what should be done with these situations.

If you are having some trouble with the radial nerve then there might be some major reasons behind it and this tunnel syndrome can be one of the aspects. These pains may arise in the body due to the stress of muscles and various other aspects which are related to the muscles near the forearm. If there is any type of compression of heavier stress on the muscles present in the forearm area.

If you are having the same sorts of problems then there are some specific tests which can be really good for you and you can certainly get out of that particular problem with ease. Most of the world-class surgeons have different methods and techniques to deal with a particular problem. They have different concepts of dealing and testing for any kind of surgery.

Radial tunnel syndrome is a special type of treatment that has been developing to tackle the radial nerve problems and the way to implementing that test is very simple. It will be a very easy way which can eventually compress the muscular position near the forearm part of the body and the lateral muscular area near the elbow and arm.

It will be a regular compression through a proper technique that can really help you to take yourself out of any injury which is linked with the radial nerve. These surgeries were used a few years back and after the success of them, they are now regularly done all around the world. Most of the surgeons prefer radial tunnel syndrome for radial nerve compression.

Methods of Treating the Disorder

There are a number of ways in which radial tunnel syndrome can be treated. In some cases, simply treating the symptoms, together with rest, may suffice. Other forms of treatment are often directed at attempting to prevent further entrapment or irritation of the radial nerve and can involve injections, ergonomic changes, or changes in work habits.

The arm may be placed in a splint for a time to ensure the nerve and the surrounding muscles are rested. In the most severe cases, it may be necessary to perform a surgical procedure to eliminate any known pressure points, thereby allowing the nerve to be decompressed.

Following surgery, the arm will normally be placed in a cast for a time, after which rehabilitation therapy will begin. The patient may have to wear a removable splint for some time during the initial stages of therapy.  Radial tunnel syndrome is seldom a serious disorder, but it can be quite painful, and occasionally it can be debilitating. Fortunately, this disorder is generally quite treatable.